VRC is really proud to announce the release of our "Pavey Longhood S"!!!
This project wouldn't have been possible without collaboration of Next Level Racing!

At the same time we also want to announce the release of the Prototype Series Package.

What is included in the package?

This Prototypes Package includes:
Bradley Project 8.
Auriel 8.
Pavey Longhood S.
And one more, yet to be announced, surprise car.

How to download the mod:
As soon as you buy the Prototype Series Package, you get access to all cars included in it. That meaning, you have
to download each car individually.

Why did we went for this method:
It has prooved to be easier for users to download just the component of the package necessary in case of an
update instead of having to download one big file with a lot of content that hasn't been updated.

As usual, don't hesitate to contact us in case you need assistance.
vrc.modding.team@gmail.com

Now that is officially released we can finally talk about it!
During the last months we have been really busy working on the official rF2 STC2000 (Argentinian racing series) mod which will be used in the very first Argentinian racing eSports championship.

This is also our first released rF2 mod, and has given us the opportunity to learn a lot more about rF2 and all its features, so this will probably quicken up the port of our already released cars on Assetto Corsa to rF2. As most of you know, there's not such thing as a "quick port" but lots of things needs to be completely reworked, so don't expect our content to be released on rF2 too soon.

For those who know the quality VRC is used to achieve, we would like you to know the STC2000 mod was a job we made on request, and of course the quality is as requested by our customers. This also means the content is not to be released in our website, but you can get it at "STC2000" website. Anyhow, if you got the mod and wish to let us know there's something we could improve, we are completely opened to hear your feedback.

With this mod we also got the chance to work straightly with STC2000 racing engineers and drivers getting a close feedback on physics, sounds and looks of the cars and tracks contained in the pack.

If you wish to know more about the STC2000 mod:
https://carburando.com/notas/el-reglamento-del-super-tc2000-esport

VRC is really proud to announce the release of our first American Racing Championship car, the "Chevrette 28GTO"!

Auriel 8 released!!!
VRC is really proud to announce the release of our "Auriel 8"!!!
This project wouldn't have been possible without collaboration of Next Level Racing!

We are really happy and proud to tell you all three VRC Prototype Series cars will be kindly sponsored by Next Level Racing!!!

As a company Next Level Racing® has pride in challenging the industry with world-class products and has a passionate and innovative global team that continues to push boundaries. The Next Level Racing® range of products are sold in more than 40 countries and stocked by major retailers around the world, check them out at www.nextlevelracing.com!!!

VRC is really proud to announce the release of Williams FW19 and Ferrari F310B V1.0, for free!!!
This projects wouldn't have been possible without the impressive collaboration we got from all our community and our donors, so we really hope you enjoy it!!!

Bradley Project 8 has just been updated to V1.1, addressing some of the issues that were reported since last week release.
As ussual you can download the new version using your purchase credentials.

Today we are also inaugurating our brand new and much asked mailing system. From now on, you will receive an email notification advicing a mod you have purchased was updated or that a new mod has been released. As this is the first time we send this quantity of emails, please check that the email might have been interpreted as spam, so be sure to set it as "not spam".

Bradley Project 8 released!!! A masterpiece inspired of an early 2000s Endurance Racing car is waiting for you.

First preview of our next release, Bradley Project 8!!! We hope that you like it!
Bradley Project 8: A masterpiece inspired of an early 2000s Endurance Racing car is waiting for you. And it is coming rather sooner than later. The initial release will be May 10th and be an addition to our premium content for just 4.50 USD. Are you ready? We certainly are!

Formula Lithium V1.1 released!
Featuring many improvements based on all the much apreciated feedback you shared during the last week. As always, if you have bought V1.0 you will be able to download all future versions of the mod using your credentials.

VRC is proud to announce the release of the Formula Lithium!!!


Formula Lithium is a truly ambitious project VRC is proud to present to the community.
It was a major challenge to recreate a full electric racing car for Assetto Corsa since it does not support full electric drivertrains. However we made it work by cooperating with Ilja Jusupov, the creator of the AC "Shaders Patch". Therefore it is required to have the latest version of it installed to get the full Formula Lithium experience. (You can get it for free at https://acstuff.ru/patch/)
In the package is included the vehicle itself with full custom phyiscs and sounds as usual, aswell as the most detailed 2019 Formula Lithium 3D-Model you have ever seen. On top of that you will get a new specifically programmed app called "Battery Meter" to keep track of your battery charge and recooperate power during the race.
VRC Formula Lithium will is avaible as Premium content for 4.50 USD including the car and the app.

What a better way to start the week than with some great news!

We have been hard at work with our Formula Lithium project lately. As some of you might know Assetto Corsa doesn't support a number of characteristics that make those cars so special, so we have been working alongside Ilja Jusupov (Shaders Patch creator) to add some features that will allow our mod to match more closely its real counterpart.
Talking about that, in this new electrical series all is about battery consumption, management, regeneration and autonomy, so the mod is going to be released alongside an app that will allow you to properly monitor your race and driving.

On top of that, we are happy to announce the release of a new beta iteration for both 1997 cars, the F310B and FW19! Featuring some major updates and highly closing their gaps to reach V1.0.

VRC wish you all a very happy Christmas and end of the year, so as a present for and thanking for all your support we will be offering a 50% off on all our mods until December 27th!!!

2018 has been a very special year for VRC Modding Team. Not only we have started to extend our well known historic F1 car collection but we started to work on our very first paid only Formula NA Modification.
In 2019 we will extend our libary further by electryfying your driving experience.
You can expect more Betas to become avaible for everyone and as always, there is a little suprise waiting around the corner.

Thank you so much for your support. Our community is growing day by day!
Witthout you this wouldn't be possible and we hope to see you back in 2019!

Since then, enjoy our Christmas sale! Ferrari F310B released!!! Be sure to visit our forums to share your feedback!!!

McLaren-Mercedes MP4-22 V1.0 Released ! Available on our website and at RaceDepartement

McLaren MP4-20 released!!! Be sure to visit our forums to share your feedback!!!

Williams FW19 Released!!! Be sure to visit our forums to share your feedback!!!

Renault R25 Released!!! Be sure to visit our forums to share your feedback!!!

Today we released an update for our Jordan J191, the changelog includes some bug fixing and some physics tweaks based on our users feedback! Be sure to download it at vrc-modding-team.net!

VRC Modding Team is proud to announce the release of the Jordan 191.
A SPECIAL THANK TO BURRITO, WHO ORIGINALLY STARTED AND GATHERED THE PEOPLE TO START WORKING ON THIS PROJECT.

Alongside the download of the mod we are providing templates for anyone who wants to make some new skins for this car.
Please read the pdf file that's included in the download.

VRC Modding Team is proud to announce the release of the Williams FW37, this is the first version after the team has decided to continue the awesome work done by F1SR & FormulaCorsa team, which we thank a lot.
All physics and sounds were made from scratch meanwhile lots of graphical and animation issues were fixed and updated to match latest Assetto Corsa build.
Alongside the download of the mod we are providing templates for anyone who wants to make some new skins for this car. 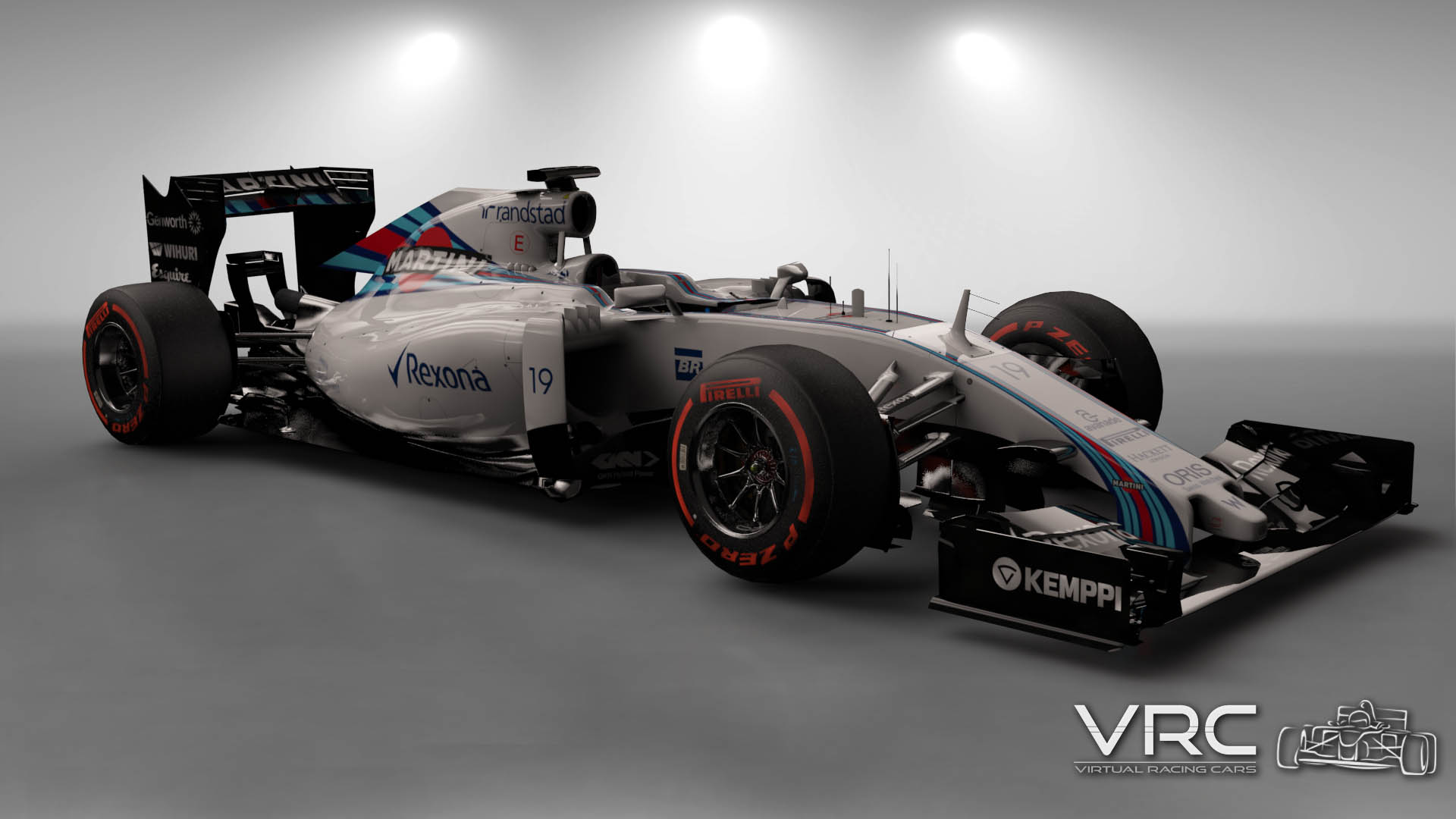 F2007 released!!!
We wanted to thank ddn tube for the amazing F2007 release video he made!!! Please visit his youtube channel and ours for more sim racing videos! Don't forget to suscribe to be always updated with our latest news!!!

VRC Modding Team is proud to announce the release of the Williams FW31, this is the first version after the team has decided to continue the awesome work done by FormulaCorsa team, which we thank a lot. This version includes the first part of changes done by VRC which concern many 3D/2D areas ,sounds and physics. More changes are planned for future updates, but you can find a detailed changelog in the pdf included with the download file. A new update for the MP4/4 is coming near!
Don't forget you can donate for every car in order to gain access to their exclusive forums! We wanted to thank ddn tube for the amazing MP4/22 release video he made!!! Please visit his youtube channel and ours for more sim racing videos! Don't forget to suscribe to be always updated with our latest news!!!

Today we released MP4/22's first beta! We demand a small donation in order for you to be part of the early access development program. As soon as you donate you will also be able to access our forums where you can share your feedback and thoughts. Our new website's online! We will keep you updated about the new projects going on, be sure to stay tuned!!!
Meanwhile we will just tease you with this ingame pic: